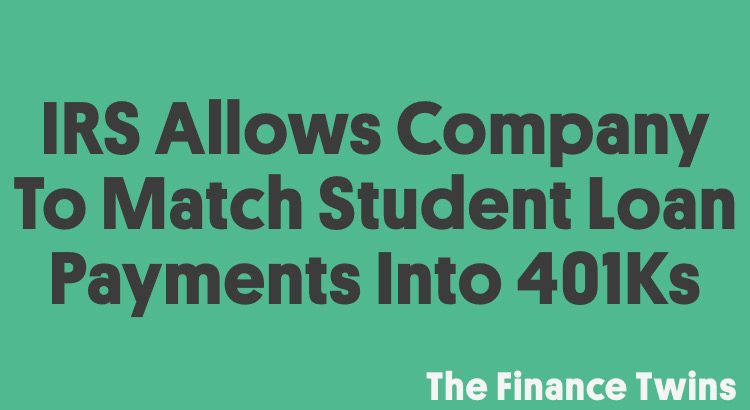 A new ruling by the IRS potentially paves the way for workers who make student loan payments to receive matching contributions into their 401K plan.

Under a new private letter ruling released publicly on August 17, 2018, the Internal Revenue Service signals its willingness to possibly allow companies to make matching contributions to the retirement accounts of employees who do not make 401K contributions, as long as they make qualifying student loan payments.

What Does This Mean?

Put another way, Millennials who are so burdened by paying off student debt that they’re not voluntarily contributing to their workplace 401K plans, could still receive an employer matching contribution to that retirement plan.

Now totaling over $1.4 trillion, student loans make up the largest chunk of non-housing consumer debt in the United States. This staggering figure is larger than total auto loans ($1.2 trillion) and total credit card debt ($0.8 trillion). This means that if this ruling were to be expanded and available to all employers, it could have broad effects on the economy and the ability for graduates to be better prepared for retirement.

Pew found that only 52% of Millennials opt-in to their employer sponsored retirement plans. Some believe that the low participation rates for young people are in part due to being overburdened by high student loan balances and repayment plans. The unprecedented levels of student loans clearly highlights the importance of making and sticking to a monthly budget, but having an additional 401K benefit tied to student loans would be welcomed by debt-burdened professionals.

The ruling by the IRS makes it clear that their approval of this plan is only applicable to the individual company that applied and ultimately received approval for this plan, but it raises the question of whether it reflects the intention of the government to adjust the law to allow other employers to similarly design their retirement plans to include this student loan benefit.

In the method approved by the IRS, an employee with student loans would be able to enroll in the plan, make monthly student loan payments, and have their employer make matching contributions into the employees 401K retirement account, up to a certain amount.

Under the specific plan reviewed by the IRS, the benefit would work as follows. Let’s assume an employee receives compensation of $2,500 during a two-week pay period, or roughly $5,000 per month. As long as the employee makes a monthly student loan payment of at least 2% of their eligible pay or $100 ($5,000 x 2%), the employer would make a matching contribution equal to 5% of the employee’s eligible pay or $250 ($5,000 x 5%) into their 401K retirement plan. To meet the minimum 2% contribution, the employee would still be allowed to make elective contributions to the 401K plan.

Employees without student loans would not be impacted by the ruling, and it would not hurt them since all employees would still be eligible for the same levels of matching contributions.

It is worth noting that the employer who made this request of the IRS already had a generous plan in place. They match a higher percentage of their employees’ compensation than the employees’ elective contributions. Their employee-friendly stance is further reflected in the fact that they proactively requested this approval from the IRS prior to it being the law, and are at the forefront of this potential legislation. The company’s name was redacted in the official release.

Who Does This Affect?

Currently, this ruling only affects the company who applied. BUT the IRS’s willingness to approve this plan, signals that other companies will likely be approved. If anything, it’s something to look out for in the future.

Why Does This Matter?

This matters because of the vast impact it could have on so many people with student loans. If you work for a large employee-friendly company, it could be worth showing this to the head of HR and see if they’d consider asking for a similar exemption from the IRS.

With so many people drowning in student loans, getting a 401K match for loan payments would accelerate the retirement savings of countless young professionals. A win-win.