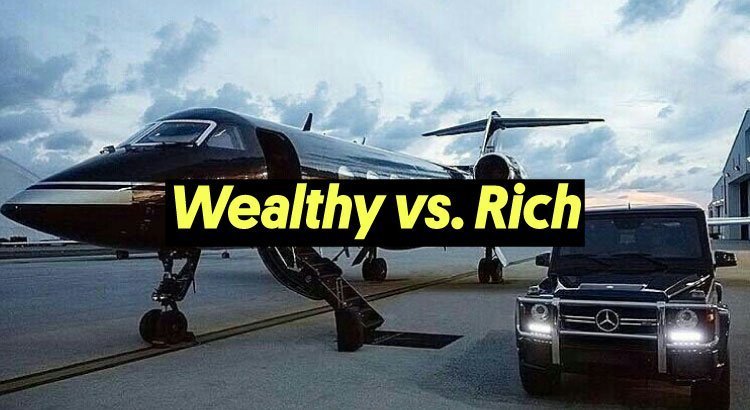 This post contains affiliate links. However, we strive to help you navigate the financial system with confidence, and our opinions are our own. Please read our advertising disclosure for more info.
Share
Tweet
Pin
Share
Buffer
Flip
4K Shares

There's a BIG difference between being rich vs wealthy. But most people don't realize that.

At some point in time the meanings of the words ‘wealthy’ and ‘rich’ merged.

Ask your friends the difference between wealthy and rich and you'll be met with blank stares.

Nowadays, most people think that they mean the same thing. But they don’t. At least we don’t think so.

Between the two of us, we graduated from Harvard, Wharton (UPenn), and the Mayo Clinic School of Medicine. Put simply, we've had the opportunity to live with, study with, and spend time with a lot of people who are rich or wealthy.

At first we didn't see the difference, but it slowly became more clear and the distinction is important.

As you'll see in this article (and yes, we will share a couple eye opening stories from things we've seen), there's a few reasons why everyone should strive to be wealthy. In fact, we found that being rich can actually prevent you from becoming wealthy.

But first, Chris Rock seems to have a pretty good understanding between the two (the video is funny but it does have some colorful language not suitable for kiddos!)

What Does Being Wealthy Mean?

Simply put, wealth is the accumulation of assets.

So does being wealthy just mean someone who has a lot of assets? Not exactly, but you're getting warmer.

To begin, a wealthy individual follows most of the principles we have described in our beginners guide to personal finance.

This means that they save at least 15%  of their paychecks (usually more), have little debt, have their retirement portfolio in smart investments, and live well within their means.

But the most important distinction is that a wealthy person has a huge net worth.

Most people would not be able to recognize these people as being wealthy because it isn't based on a flashy lifestyle.

For everyone else, the good news is that the key to becoming wealthy is not complicated, but that doesn’t mean it’s easy. Which is why most people never truly become wealthy.

What Does Being Rich Mean?

Being rich simply means having a high income.

Instead of investing all of that money, they buy expensive cars and jewelry (they often need to use loans).

This is why you shouldn't judge a book by its cover. You might see someone driving a brand new BMW, but that doesn't mean that they have a fat bank account.

Can You Actually Go Broke Being Rich?

Absolutely. There are ton of celebrities that are known to have blown through crazy amounts of money and gone into bankruptcy.

Nicholas Cage at one point had a fortune of $150 million and lived the lifestyle expected of the rich and famous. After buying 10+ houses, an island, and rare collectibles, he found himself in financial trouble. He had to foreclose some homes and owed over $6 million in back taxes to the government. Ouch.

Compare that to finance guru and billionaire Warren Buffett, who doesn’t let his wealth go to waste. He still lives in the same house in Nebraska that he purchased back in the 1950s for just over $30,000!

Buffet drives the same Cadillac for years, but prefers to spend his money by flying in private jets, because he truly understands which things bring him the most happiness. It certainly isn’t having the flashiest car. Just remember that you can't see the outside of a car from the driver's seat. Paying for that sexy car is a waste.

Being Wealthy Isn’t Only About Sacrifice

Many people think that to create wealth they need to skip out on all of the fun in life. However, that’s just not true.

The key to building wealth isn’t so much about being cheap as it is about prioritizing happiness.

Research by Harvard Business School Professor Michael Norton has shown that spending our money on experiences, rather than material goods, brings us more sustained happiness!

Instead of buying the new jacket that just came out, pay for an experience (a show, an art class, a fun trip, etc.).

If you are already responsible with your money and want to spend it, just be wise with it. You’ll see that avoiding the things that make you appear rich will allow you to focus on the things that actually make you happy, while building wealth.

Experiences can be a lot more cost effective than buying the latest gadgets too. Once you realize which things you actually need you’ll see that you’ll slowly begin to yearn less for the things you once thought you had to have. All the while becoming wealthy.

If You Can Afford It, You Can Still Have The Life Of Your Dreams

As we mentioned at the beginning, we had the chance to meet and become friends with truly wealthy people due to having gone to Ivy League universities.

We met people who would take weekend trips on private jets, drive $150,000 cars, and eat at the nicest restaurants at the world. We were even lucky enough to be invited on some of these trips on their planes.

But these same people were very careful with the way they spent money. They realized that money can't buy happiness so they prioritized experiences. When they would shop for clothes they got extremely excited about sales and finding a good deal. They were experts at saving money even though they didn't have to be.

In fact, they had amassed enough wealth that as a percentage of their net worth, they spent very little of it. This means that even though they lived an ‘expensive' life, they still had more money at the end of the year than they started with every single year.

In this free email course, we show you how take control of your money. From how to create your first budget (it's easy - trust us!), all the way to how to increase your credit score. Join now to get started today!

Our boot campers will also be notified of new articles!

Success! Check your inbox to begin the 7 - Day Boot Camp!

52 thoughts to “Rich Vs Wealthy: Here’s Why It’s Better To Be Wealthy”