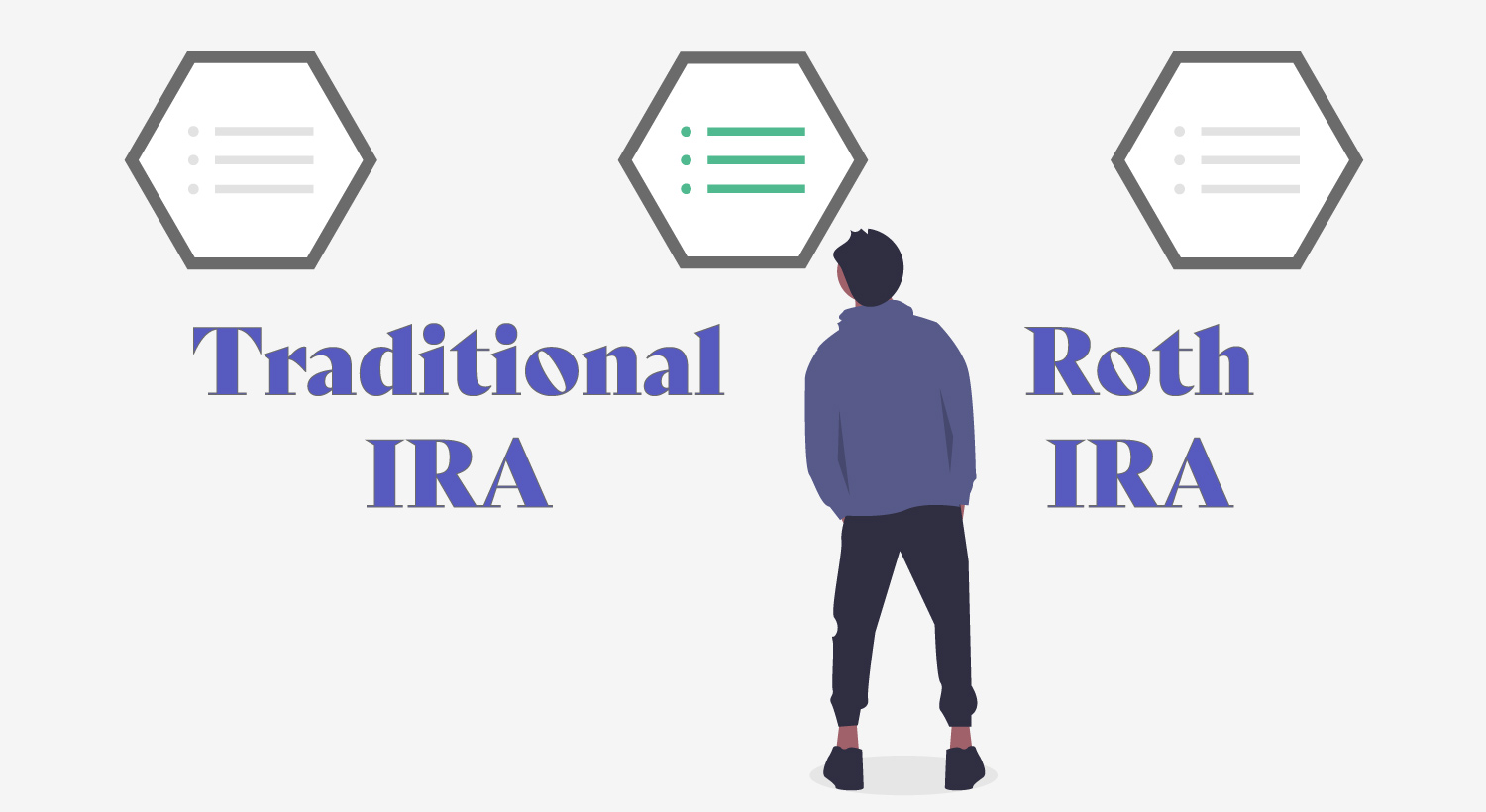 Choosing between a Roth IRA and a traditional IRA is one of the first big decisions many beginning investors make when they are getting started and learning how to invest. And it’s a consequential one, as choosing between these two options can cost or save tens of thousands of dollars for younger investors over their lifetime.

The primary difference between a Roth IRA and a traditional IRA is how they’re taxed.

With a traditional IRA, you’re getting a tax deduction for making a contribution. Both your contributions and your earnings grow tax-free until they’re withdrawn in retirement; at that point, they’re taxed at your ordinary income rate.

With a Roth IRA, you’re contributing after-tax money into the account, which means there’s no current-year tax benefit. Instead, your contributions and earnings grow tax-free. And you can also withdraw them tax-free once you hit 59 ½.

But before you decide between the two, you should see if your income is too high for you to even be able to contribute to a Roth IRA. Traditional IRAs have no income limits so high earners may not have a choice.

Most households won’t need to worry about the income limits though because essentially only the top 10% of earners make enough to surpass them.

To learn more, see this article: What Is An IRA?

Here’s the simplest question to ask yourself in order to determine which account is right for you:

Will your tax rate be higher this year than during retirement?

If you believe your tax rate will be lower in retirement, it makes sense to go with a traditional IRA this year. The benefit here is that you’re getting a tax deduction this year at a higher rate and then paying a lower rate when you withdraw the funds during retirement.

But if you expect your tax rate will be higher in retirement, you want to do the opposite. In that case, it’s best to pay taxes this year, and then when you retire, you can withdraw that money tax-free.

Is it as simple as that, though? It certainly can be. Unfortunately, it’s not that easy.

One benefit of contributing to a traditional IRA is that you can always convert it into a Roth IRA. Upon making this conversion, you’re going to owe taxes on the amount you convert at that year’s ordinary income rate.

For example, let’s say you have a $100,000 balance in a traditional IRA account. Plus, your total income tax rate is 20%. Converting your traditional IRA to a Roth IRA would mean paying $20,000 in taxes this year.

Why would you want to do this? Well, you’re effectively paying taxes now and then enabling your Roth IRA to grow tax-free. So it goes back to the same line of thinking as we discussed earlier: it’s all about current and future tax rates.

What’s really important here is that with a traditional IRA you have the option to convert. And therefore, it offers more flexibility for those who are not sure of their situation — or for those who are planning to have a lower income tax rate before they retire.

And this is why, if you’re really unsure of your future tax rate, I believe a traditional IRA is the better option.

To examine who can benefit from this optionality, as well as then times when a Roth IRA would make the most sense, let’s look at six different case studies.

Let’s say you’re a dual-income household and you plan to have kids in the next few years. Upon having kids, the plan is for one partner to leave the working world and stay at home full-time. Therefore, you expect your total household income (and your tax rates) to go down.

If that’s the case, you could invest in a traditional IRA prior to one partner leaving the workforce. Then, once your tax rate is lower upon switching to a single income household, you could convert the traditional IRA into a Roth IRA, paying taxes that year.

It’s these short-term (and often planned for) scenarios — where a household may find itself in a lower overall tax bracket — in which planning for a traditional to Roth IRA conversion can save a lot of money in taxes.

A business owner can serve as a great example of someone whose income is highly variable, and who could therefore benefit from the flexibility offered by a traditional IRA.

For example, a profitable business owner who plans to sell their business in a few years could contribute to a traditional IRA this year, where they have an income. Then once their tax rate goes down after making the sale, make the conversion to a Roth IRA.

Case #3: Moving To A State With Lower Tax Rates

When people think about future tax rates, what’s most often on their mind is their income. But, where you live today, as well as where you’ll live in the future, can play a large role as well.

For example, let’s say you’re currently living in a state with a high overall tax rate, like California. If you’re likely to move out of California at some point — perhaps to a state with lower taxes —  you could benefit from contributing to a traditional IRA now and then converting it to a Roth IRA once you move.

Living in Illinois, which is a relatively high income tax state, I know of a few baby boomers that relocated to Florida for a year or two and made their conversion in order to take advantage of the lower tax rate. What’s important to keep in mind is that you only need to reside in another state for one year.

The math on this one is pretty interesting, as when you get older and build more wealth, you could essentially pay for a year’s worth of living expenses just with the amount you save on taxes by living in another state.

If at some point in the future your goal is to take time off work — whether for an unpaid sabbatical, a leave of absence, or to get an advanced degree — you could convert to a traditional IRA to a Roth in those lower-income years.

For those earning a higher-paying advanced degree — such as an MBA or a PhD — this is especially true, as those years are ideally your last lower-income-earning years for quite some time.

In 2020, the total amount someone under the age of 50 is allowed to contribute to their IRA is $6,000. This contribution limit is the same for both traditional and Roth IRAs. Yet, because with a Roth IRA you’re contributing after-tax dollars, $6,000 inside a Roth IRA has greater value (i.e., $6,000 tax-free has more value than $6,000 pre-tax).

This can make a difference for those who are looking to maximize their contribution to tax-advantaged accounts by any means necessary. As such, it would make sense here to contribute to a Roth IRA, because it has the highest contribution limit when taking this into account.

Contributing to an IRA is a use-it-or-lose-it scenario. Each year, you can only contribute so much. And if you miss a year, you can’t make up that contribution later on.

Years down the road, this could leave you in a situation where you’re looking to save using a taxable investment account to save for retirement, which means you’ll have to save a lot more money compared to using your IRA. This is very common for those who don’t start saving for retirement until later in life.

Case #6: Using A Roth IRA As A Worst-Case Emergency Fund

You’ve probably heard of Dave Ramsey’s Baby Steps. In Step #3, Ramsey recommends saving three to six months’ worth of expenses in an emergency fund before starting to invest.

Now, let’s say you’re following the Baby Steps, and it’s your goal to save the upper limit, which is six months of expenses.

Here’s how long that will take you depending on your savings ratio:

Those are some pretty high savings rates that demonstrate some strong money skills. And even at those high thresholds, it will still take you quite a long time to start investing. This can have a huge opportunity cost years down the road. In fact, $6,000 compounded at 7% for 40 years equals $89,8467.

One little-known benefit of contributing to a Roth IRA is that contributions can be withdrawn at any time tax-free and penalty-free. Unfortunately, that isn’t the case for traditional IRAs, as you’ll have to pay taxes and a penalty for making an early withdrawal.

Therefore, an option worth considering is splitting your contributions between an emergency fund and a Roth IRA, until your emergency fund reaches six months. This way, you don’t forgo the opportunity to contribute to an IRA, your investments compound, and if (in a true worst-case scenario) you have to withdraw from your IRA, you’ll be exactly where you’d be if you were trying to save only in an emergency fund.

Your situation and your goals are different. The best thing is to use these case studies to analyze your own situation, making the best choice you can make based on what you know today.

So, while we did get a little complex with the above case studies, don’t let it overwhelm you from starting an IRA in the first place. Either type of IRA is better than not investing for retirement at all, and there are pros and cons to both options!

It’s also impossible to predict your circumstances 30 years into the future, so don’t dwell on the decision for too long, since it’s important to start investing as early as you can!

Where To Open An IRA

If you’re finally ready to open an IRA below is a list of companies that you can use to quickly open an IRA in just a few minutes! 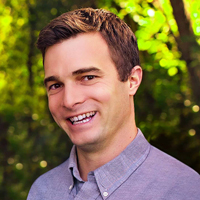 R.J. Weiss is the founder and editor of The Ways To Wealth, a Certified Financial Planner™, husband and father of three. He’s spent the last 10+ years writing about personal finance and has been featured in Forbes, Bloomberg, MSN Money, and other publications.